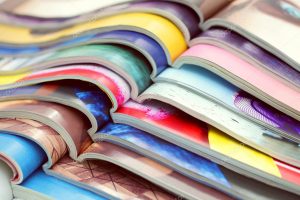 The article provides a literature overview of fibrolamellar hepatocellular carcinoma (FL-HCC) with particular focus on the pathologic markers used for diagnosis, including findings on gross anatomy, microscopy, and immunohistochemistry. The author highlights that the cancer is remarkable for being predominantly found in children and young adults who have no evidence of liver disease. The disease can be confused with focal nodular hyperplasia (FNH) and sclerosing variant of hepatocellular carcinoma (SV-HCC). The author reviews the defining features of FL-HCC on heamtoxylin and eosin staining including the thick fibrous bands, large polygonal cells with prominent nucleoli, pale bodies. On immunohistochemistry the tumor is distinguished by staining for CK-7, CD68. The author runs through outher immunohistochemical findings of the tumor and contrasts it to SV-HCC. The paper evaluates signalling pathways typically mutated in HCC versus FL-HCC, pointing out that FL-HCC shows upregulation in mTORC1 (mechanistic target of rapamycin complex 1) signaling and FGFR1 (fibroblast growth factor receptor 1) signaling. The author cites literature describing three classes of FL-HCC (proliferative class, inflammatory class, unannotated class) which are assigned based on gene set enrichment analysis (GSEA) and nearest template prediction and immunohistochemistry. Lastly, the author reviews what is known of genetic mutations in FL-HCC highlighting the finding of a chimeric protein composed of DNAJB1-PRKACA (a fusion protein from a chaperone protein DNAJ and the catalytic subunit of protein kinase A). The author speculates that the chimeric protein contributes to tumor pathogenesis and recommends it be used as a diagnostic marker due to its sensitivity and specificity for FL-HCC. The author further recommends that future efforts be made in understanding the mitochondrial genome in FL-HCC due to the abundance of mitochondria found in the disease.

Liver cancers that originate in the liver (primary liver cancers) in childhood are rare and comprise 1-2% of all pediatric tumors. Hepatocellular carcinoma (HCC) is the second most common primary liver cancer in children after hepatoblastoma and accounts for 1/3 of all primary liver cancers in children. Incidence of HCC is greater in areas of the world where hepatitis B infection is more frequent. Surgery remains the mainstream treatment for patients with HCC; however, survival rates are poor.

The SEER database is provided by the National Cancer Institute (NCI) from the National Institutes of Health (NIH). This study examined a large group of adult and pediatric HCC patients from the SEER database. Patients were grouped as pediatric (age ≤ 19) or adult (age ≥ 20). This study examined the 1-, 2- and 5- year overall survival, mortality and cancer-specific mortality.

63,771 cases of HCC were reported to the SEER database between 1973 and 2011. Average age of diagnosis was ~64. The overwhelming majority of HCC occurred in adults, however, 0.4% of the total cases observed (257 patients) occurred in pediatric patients with an average age of ~13 years. HCC was found to be more common among Caucasians in both the pediatric (50.4%) and adult population groups (50.5%).

Of the pediatric patients, 24.1% had fibrolamellar hepatocellular carcinoma (FLHCC), and was far more common among pediatric patients compared to adult patients (24.1% pediatric vs. 0.3% adult). 37% of FLHCC cases were diagnosed while the tumor was “localized disease” (only in the liver), 33.3% had regional disease (tumor found in the lymph nodes nearby) and 29.5% had distant disease (metastasis). FLHCC had a higher rate of regional disease and distant disease and a lower rate of localized disease compared to non-FLHCC. Patients with FLHCC had longer 1-, 2- and 5- year survival rates (67, 50, and 31%) compared to non-FLHCC (34, 23, and 12%). Despite presenting with larger tumors and more advanced disease, FLHCC was associated with prolonged survival compared to non-FLHCC in both the pediatric and adult populations.

Despite being the second most common primary hepatic malignancy in children, HCC remains a rare disease among pediatric patients accounting for approximately 0.5% of all new pediatric malignancies. Diagnosing pediatric HCC is often delayed, resulting in more advanced disease and larger tumors.

The takeaway: FLHCC is associated with prolonged survival compared to non-FLHCC in both the pediatric and adult populations.

Published in the Proceedings of the National Academy of Sciences, November 3, 2015.  Link to article

In previous publications this group showed that there is only one change in the DNA of fibrolamellar patients: a deletion in one copy of chromosome 19 that causes two genes to fuse together.  In this paper the group shows that this single change in the DNA results in many different changes in the expression of different genes: over 3500 genes either increase or decrease very significantly.

The group looked at two kinds of changes in the expression of the genes: They measured the changes in the levels of the messenger RNAs and they measure the levels of proteins in the cell.  Why is this significant?  Some of the genes that are increased help explain many of the previously observed properties in fibrolamellar cells such as the fibers which give the disease its name.  Most importantly, the work identified a few pathways that are increased in fibrolamellar – pathways that are known to drive other tumors.  Based on these results, the group proposed that a number drugs that are currently used for other cancers, could be “repurposed” for fibrolamellar.  One that they proposed are drugs that affect the Aurora Kinase A pathway.  The results of this paper, even a year before they were published, were provided to the FDA and became the basis, on the recommendations of the authors of this paper, for the current clinical trial ENMD2076.  Other clinical trials, based on other results in this paper, are in preparation.

The question behind this study is whether a test involving a glycoprotein called CD68 is a useful way to distinguish between fibrolamellar and scirrhous hepatocellular carcinoma. It’s important to make this distinction because the two diseases have different treatments and outcomes. But, as the authors write: “Even though the two diseases are distinct in appearance, recent studies have shown a lack of consistency in how fibrolamellar is diagnosed by pathologists.”
The study used four fibrolamellar patients who had been diagnosed by the pathology department of Mongi Slim hospital, in Tunisia, over a thirteen-year period, between 2002 and 2014. (One man, three women, between 23 and 34 years old; none with cirrhotic livers). Researchers had access to all four’s charts and microscopic slides and compared the effect of antibodies against CD68 and another protein CK7. All cases were positive for CK7 and for CD68, making immunostaining a sensitive marker for FL-HCC that may be of use in routine diagnostic surgical pathology.
The takeaway: “Lack of CD68 staining should suggest caution in making a diagnosis of FL-HCC.”

The authors of this paper describe an extremely rare case of a 53-year-old woman first diagnosed with a benign tumor called an auricular myxoma on the left atrium of her heart. Three months after a successful surgery to remove this tumor, the patient was admitted to the hospital with abdominal pain. The doctors found a tumor on the left lobe of her liver and diagnosed her with fibrolamellar hepatocellular carcinoma upon examining the tumor after surgery. At the time of the publication of this paper, the patient was asymptomatic.

This case is unusual and extremely rare because this patient had two independent primary tumors, meaning two tumors developed and occurred separately in different parts of the body and were not a result of metastasis, whereby one tumor spreads and causes another.

RNA often acts as the messenger that translates information from genes of DNA into what proteins need to be made. Changes in the DNA then lead to changes in the RNA transcripts that next lead to changes in proteins. The sequence of the DNA can change, as happens with the deletion in chromosome 19 leading to the fusion of DNAJB1 and PRKACA in fibrolamellar hepatocellular carcinoma (FLHCC). However, modifications to how the DNA is packaged and labeled can also lead to changes in the RNA and protein; these kinds of changes to the DNA that are not direct changes to the sequence are the focus of epigenetics. Methylation is a specific kind of epigenetic change to DNA where methyl groups (made of 3 hydrogen atoms and one carbon atom) are added to the DNA, typically reducing the RNA transcription of that gene and lowering the amount of protein in the cell.

The authors of this paper studied the epigenetic changes in fibrolamellar and established a FLHCC DNA methylation “signature,” meaning a similar pattern of methyl groups on the DNA that is specific to FLHCC. This paper supports that FLHCC is a distinct disease from hepatocellular carcinoma, which warrants a separate treatment plan.

FGFR1 and FGFR2 in Fibrolamellar Carcinoma

Growth factors are proteins that help cells multiply; cancer cells often hijack these proteins and their receptors to grow faster than normal cells. Recently, drugs have been developed to block a receptor for a specific kind of growth factor known as fibroblast growth factor receptors (FGRFs). Fibroblasts are cells that make up connective tissue and produce collagen.

Fibrolamellar hepatocellular carcinoma (FLHCC) is characterized by the presence of fibers of collagen in the tissue as well as a DNAJB1-PRKACA chimeric RNA transcript and protein resulting from a fusion at the DNA level. It is not yet known what this chimeric protein is targeting in the cell to drive the cancer, so there is no clear link between this chimeric protein and fibroblast growth factors or their receptors.

However, the authors of this paper wanted to establish whether the recently developed FGRF inhibitors would be useful to FLHCC patients. They looked at nineteen FLHCC samples that they verified with the confirmed presence of the FLHCC chimeric RNA transcript and determined through various methods that FGRF1 and FGRF2 are not significantly present in these FLHCC samples at the RNA transcript or protein level. Thus it is unlikely that FGRF inhibitors can effectively treat most FLHCC patients. ​ ​

In this study, doctors analysed 21 fibrolamellar patients at a Sao Paulo hospital to identify the best predictors of good and poor prognosis. Two-thirds of the patients were female, and the average age at diagnosis was 20 years old. Fifteen out of 21 patients had stage III or IV cancer at the time of diagnosis, which means the cancer had grown extensively in the liver and spread to nearby lymph nodes or distant organs by the time of diagnosis. Three out of 21 patients had “mixed/ fibrolamellar,” which means the tumor contained regions which looked like conventional hepatocellular carcinoma as well as regions which looked like fibrolamellar. The authors found  “mixed” fibrolamellar had a worse prognosis. Twenty out of 21 patients had surgery, but in six of these cases the tumor was considered inoperable. Surgery was the best option to treat the disease. Recurrence occurred in 8/10 patients who had follow-ups, with the average time to recurrence being 12 months. If the tumor was at a more advanced stage at the time of surgery the patient was more likely to experience recurrence.

The best predictors of a good prognosis were negative surgical margins (which means that during surgery no cancer cells were seen at the edge of the tissue that was removed) and an earlier stage of disease at diagnosis and treatment with less invasion of surrounding lymph nodes and organs.

In this study the DNA from tumor samples from 10 patients was sequenced and compared to the DNA from non-cancerous tissue from the same patient to identify mutations that had occurred in the cancer. The only consistent mutation in patients was the DNAJB1-PRKACA deletion. Other mutated genes that were found in more than one patient included MUC4, GOLGA6L2, DSPP, FOXO6 and HLA-DRB1, gene which have been implicated in other types of cancer. Since the only consistent mutation found was the DNAJB1-PRKACA deletion, this mutation may be sufficient to cause the cancer, and research into the fusion protein produced by the mutation probably offers the best chances of improving the diagnostic and treatment option for fibrolamellar patients. As compared to other cancers, fibrolamellar seems to have relatively few mutations in genes which cause changes in the proteins those genes code for.

This site does not provide medical advice, diagnoses or treatments.